Weather-proofing the GH4 with Speedbooster

When I upgraded from an Olympus OM-D E-M1

) to a higher-quality kit, it was pretty clear that the weather-sealing of the camera body, lens and accessories won't be as good - it doesn't get much better than the Olympus OM-D E-M1

) (rain, dust and freeze proof) so it could only decrease. However, watching most professional documentary and expedition shoots, apart from when using GoPros, video cameras are simply not made for rough conditions. Usually you work around the weather-related issues, often with a crew, using umbrellas and camera bags/sleeves.

) is a great video camera and it is weather-sealed. For a full weather-proof package you would have to get the Panasonic lens which isn't really the best option for video shooters for multiple reasons: 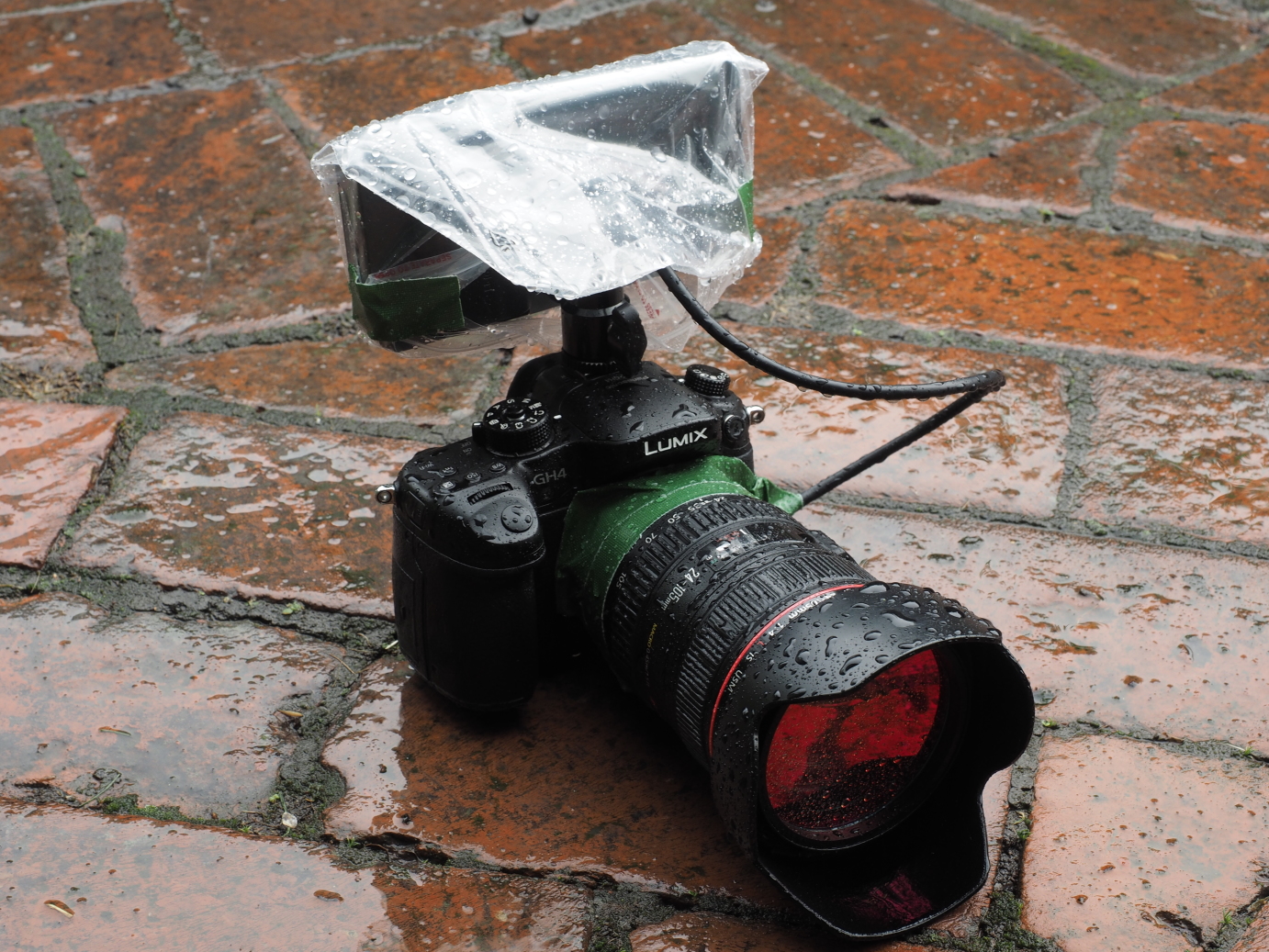 All of this combined means that vintage or modern Canon EF or Nikon mount lenses, both APS-C and full-frame, are the best choice for film. Good glass greatly improves the image and will work on many other, higher end cameras as well, for instance Blackmagic Ursa Mini or RED. Canon L lenses are great because not only do they deliver the goods optically, they are also weather-sealed, one example being the very versatile Canon EF 24-105mm f/4 L IS

This, of course, leaves only the Metabones Canon EF to BMPCC Speed Booster

) in between the camera and the lens vulnerable to the elements. It's a shame that Metabones hasn't implement better sealing because the front and back end of the speedbooster is a pretty standard EF and MFT mount, respectively, and it is made of solid metal. I think the lens side of the speedbooster might actually be slightly sealed because of the rubber gasket from the Canon L lens, however, the camera side of things is just metal on metal and therefore not sealed at all. 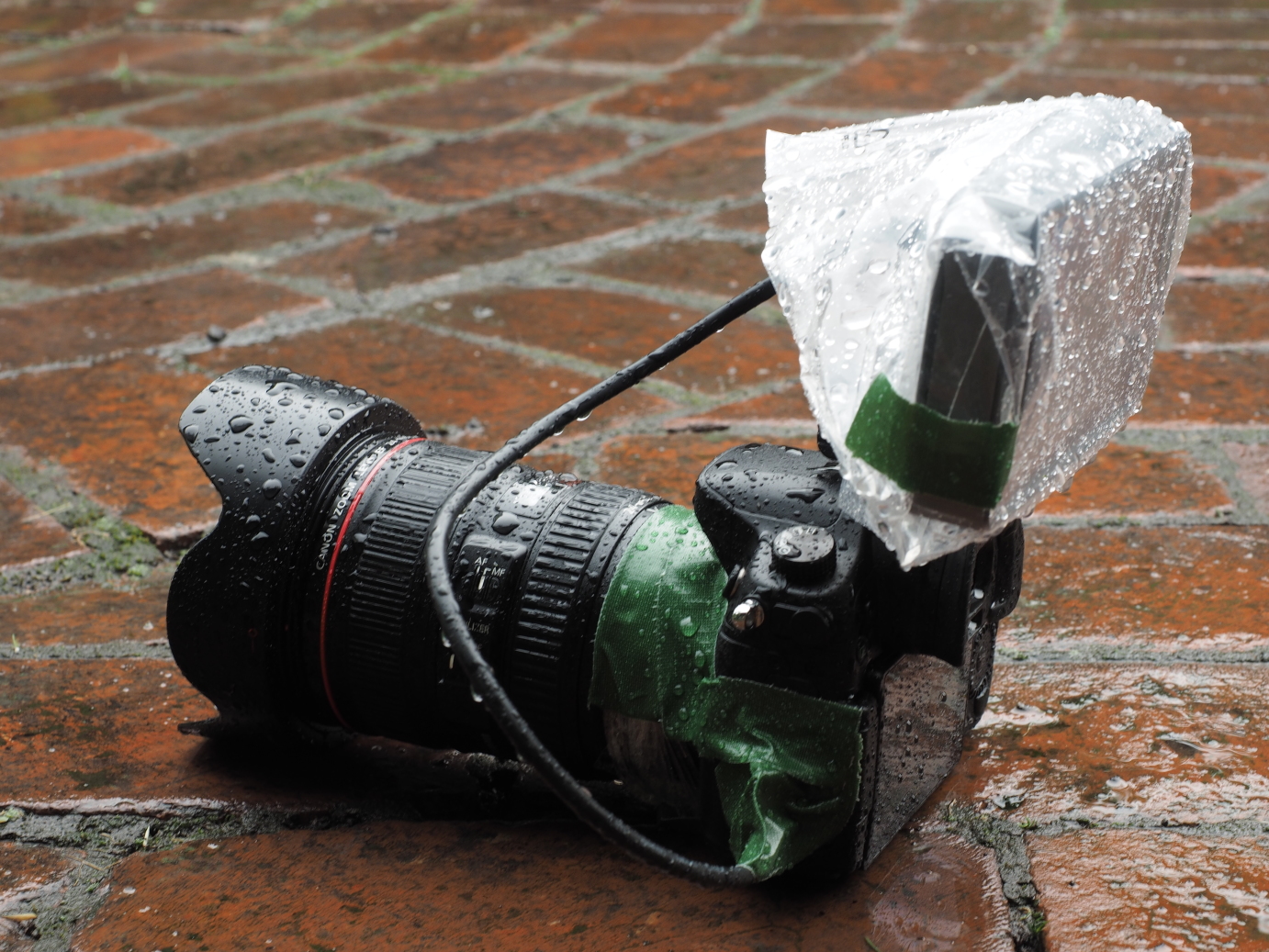 Taping over the speedbooster with Gaffers tape works pretty well since it is easy to work with, and it comes off without leaving and residue behind (unlike Duct tape and other, stronger tapes). Unfortunately, it is kind of hard to get the camera to speedbooster interface taped off perfectly because of the awkward protrusion that is the GH4 EVF/flash housing. I added a layer of cling film as a first layer of protection, then taped everything in place. So even if the sides of the tape let some water in (which they shouldn't), hopefully the plastic will still keep the openings in the speedbooster dry. 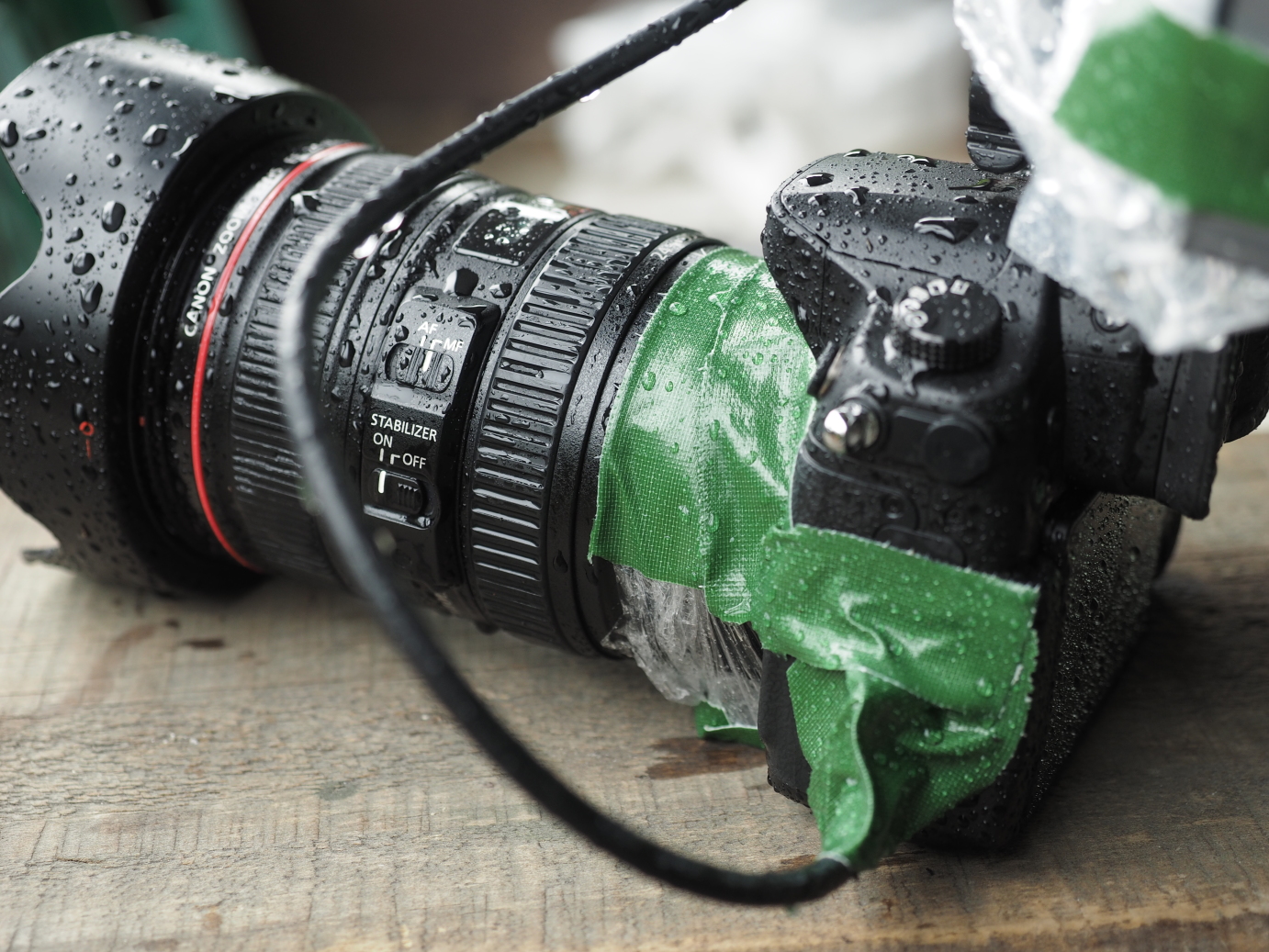 My test consisted of a roughly 40 minute walk in moderate to heavy rain, keeping the camera level or pointing down (mostly to keep rain off the front of the lens) and always horizontal. I also decided to throw my SmallHD 501 On-Camera Monitor

into the mix which also meant exposing the HDMI interface of the GH4. A plastic bag and more tape covered it nicely and I could still operate the buttons and joystick on the monitor. Swapping batteries on the monitor also still worked but it'd probably try to cover it more completely in the future and just cut a little opening for the HDMI cable (it was easier if it attached to the bottom of the monitor instead of the back at a 90 degrees angle). 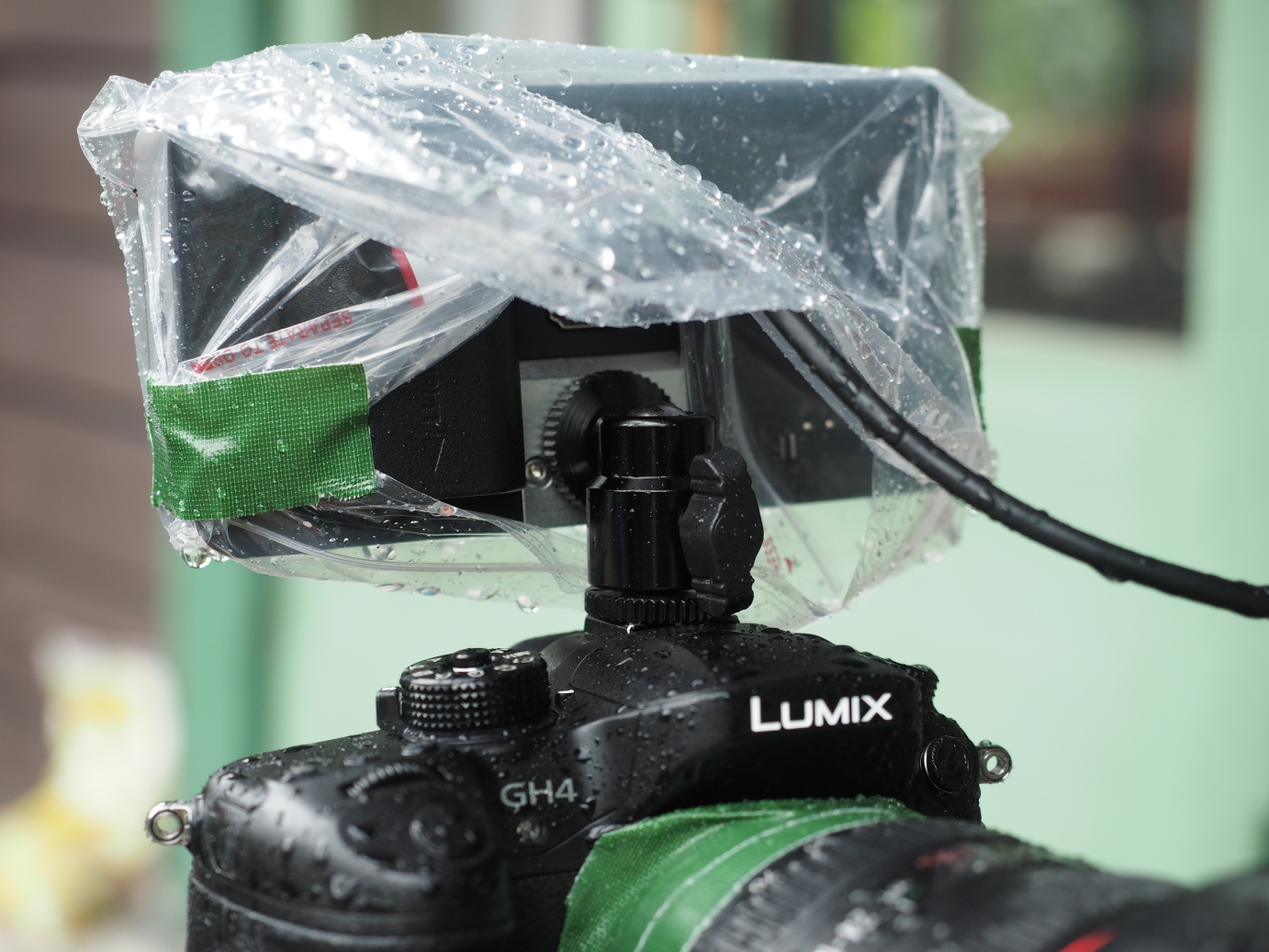 Overall, it worked beautifully and I feel like I could venture out into a few hours of rain if I had to shoot something without the help of an assistant holding an umbrella. Swapping batteries or lenses or fiddling with any of the accessories is almost impossible without additional cover, though. Also, using a microphone would require a broader rain cover as well. 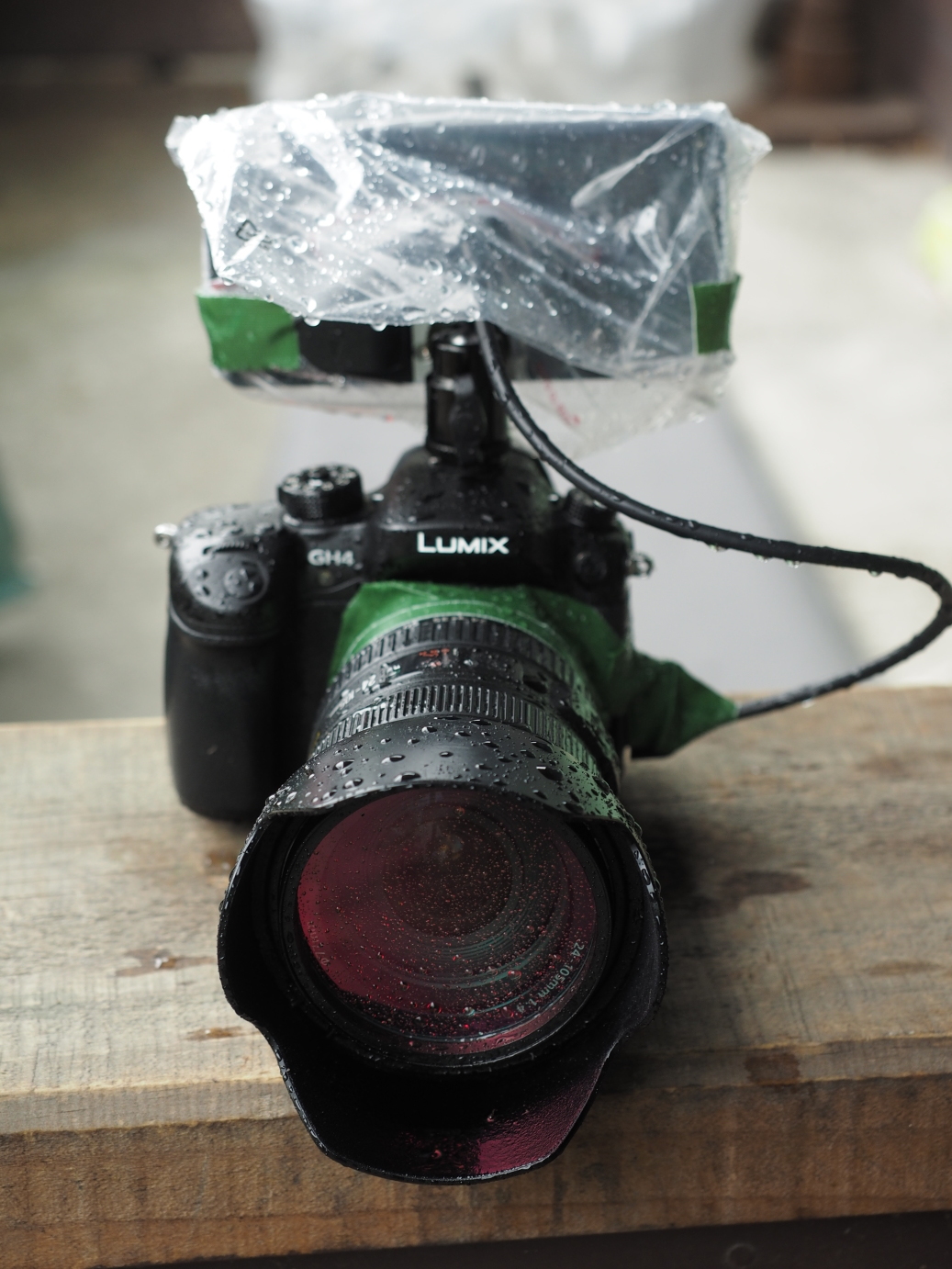 Please use the comment section below or head over to Google+ or Twitter @tobiaswulff to discuss this article or any of my photography and videography work. My Flickr, 500px and Vimeo pages also provide some space to leave comments and keep up to date with my portfolio. Lastly, if you want to get updates on future blog posts, please subscribe to my RSS feed. I plan to publish a new article every Wednesday.