Motorised sliders (or dollies) bring motion and a nice parallax effect to timelapse shots. Commercial sliders have the advantage of being well built (hopefully roughly proportional the amount of money spent) and easy to set up. On the other hand, costs for rails and card alone can be several hundred dollars and adding motors and a control unit quickly pushes it $1000. 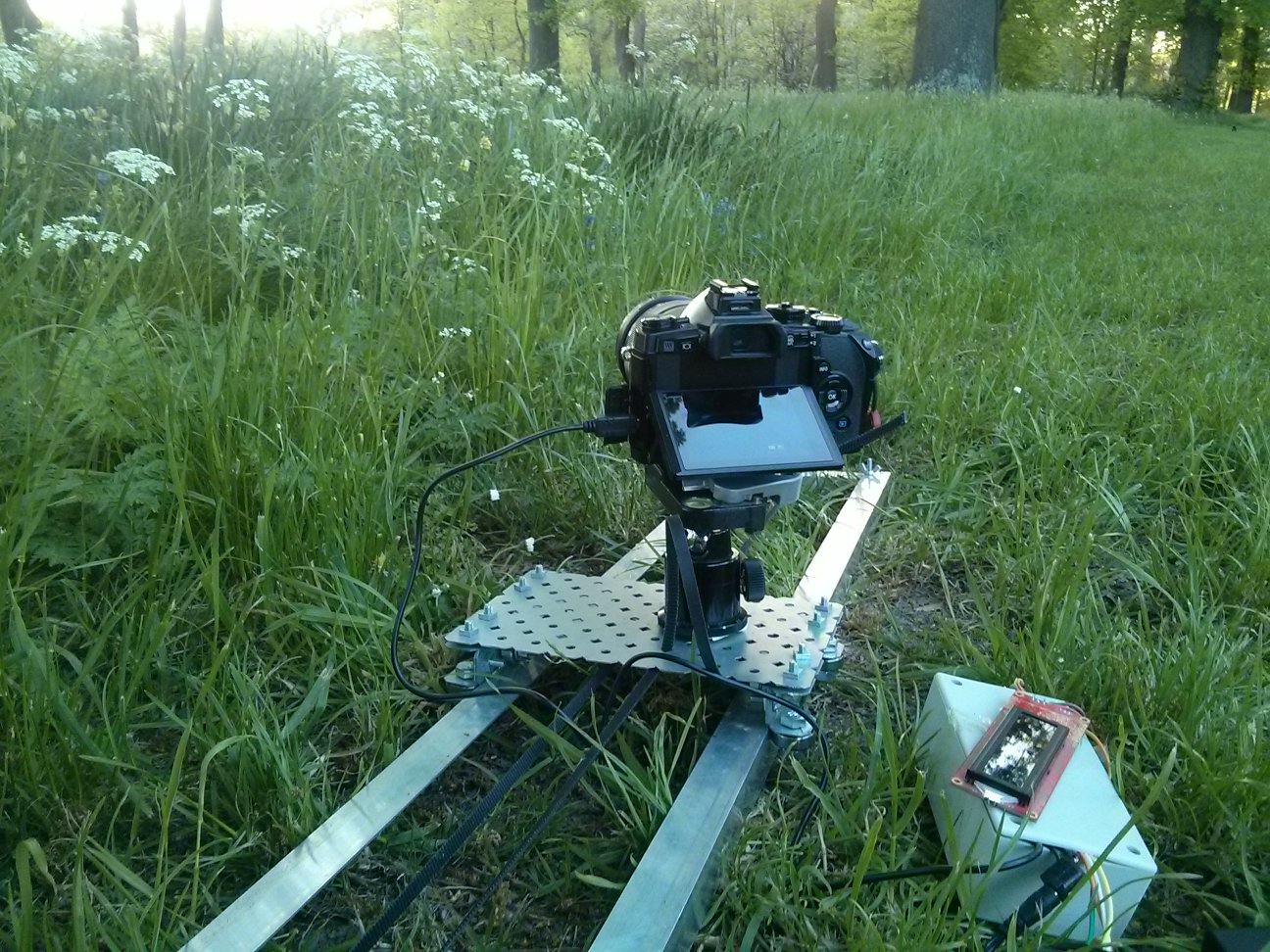 A home-made DIY slider can be made with $150-200 for materials and the Arduino board or other micro-controller, depending on what you already have lying around. I'd like to take mine hiking more often but it wasn't built with minimal weight in mind so this is definitely a point where a good commercial carbon-fiber slider and a cart with less metal could come into play one day. 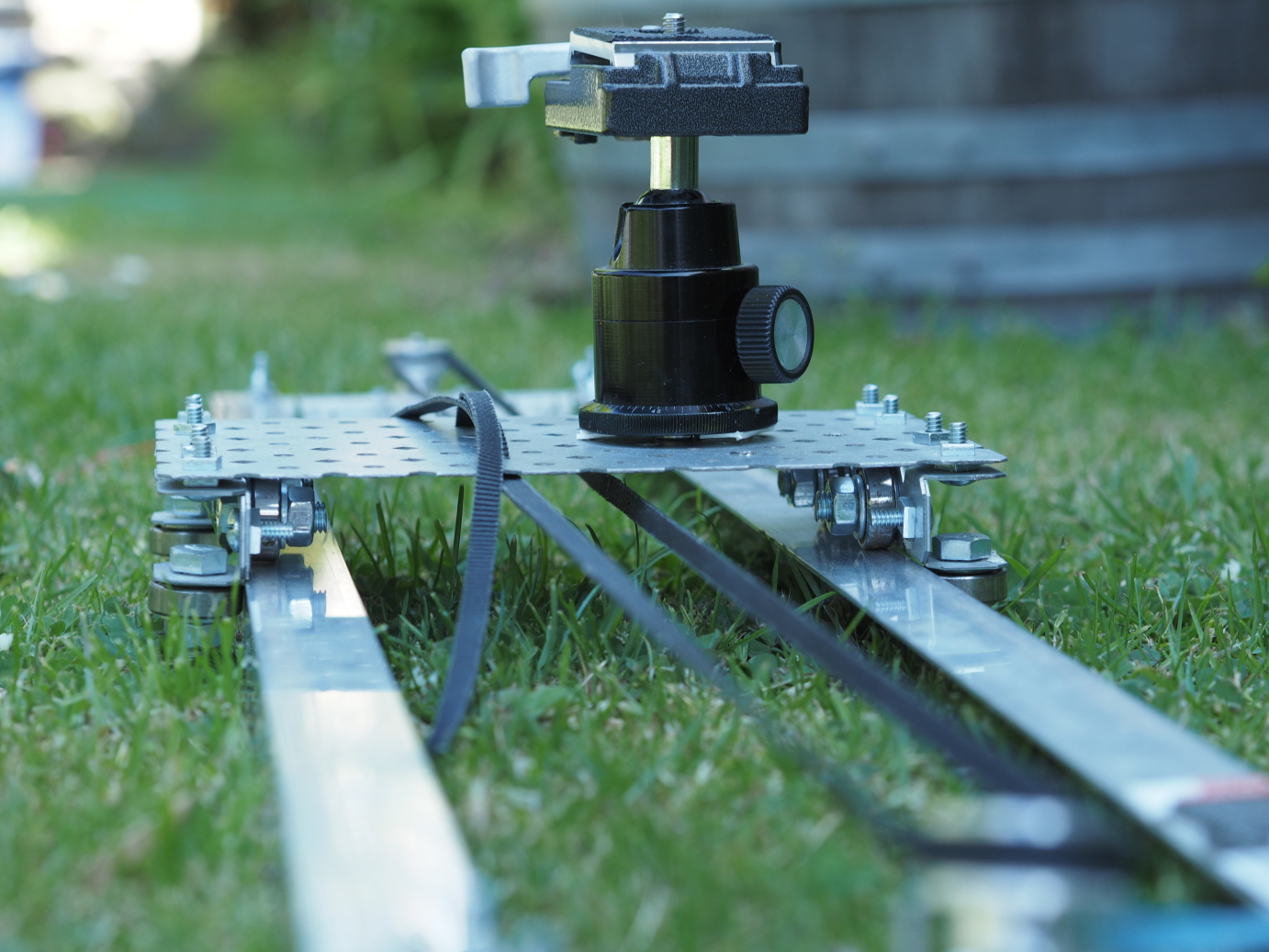 There are many different designs out there but the biggest distinctions between them are:

Continuous motion is cheaper because a very simple motor can be used and the expensive timing belt can be replaced with a wire to pull the cart. However, this does not work for longer exposures since the camera has to be absolutely still while the shutter is open so I opted for a stepper motor right from the start. Keeping a cart stable on a monorail requires more engineering than with two rails but it can cut down on weight and makes it easier to mount to a single tripod with a screw hole in the centre of the rail. I didn't know how to build this so I went with two rails and wheels on either side to keep it stable.

At first I thought I can keep the cart lighter by mounting the stepper motor to the end of the rails. While this is true, once you add up the weight of the metal cart itself, a camera body and lens, and ball head, a single stepper motor wouldn't make much of a difference any more. Having the motor on the cart has several advantages: everything, from the camera to the motor to the control unit is in one place and you won't need to run cables all over the place; only half the length of timing belt is required since it won't loop around the ends. Here is a link to a good example of a DIY monorail motor-on-cart slider. 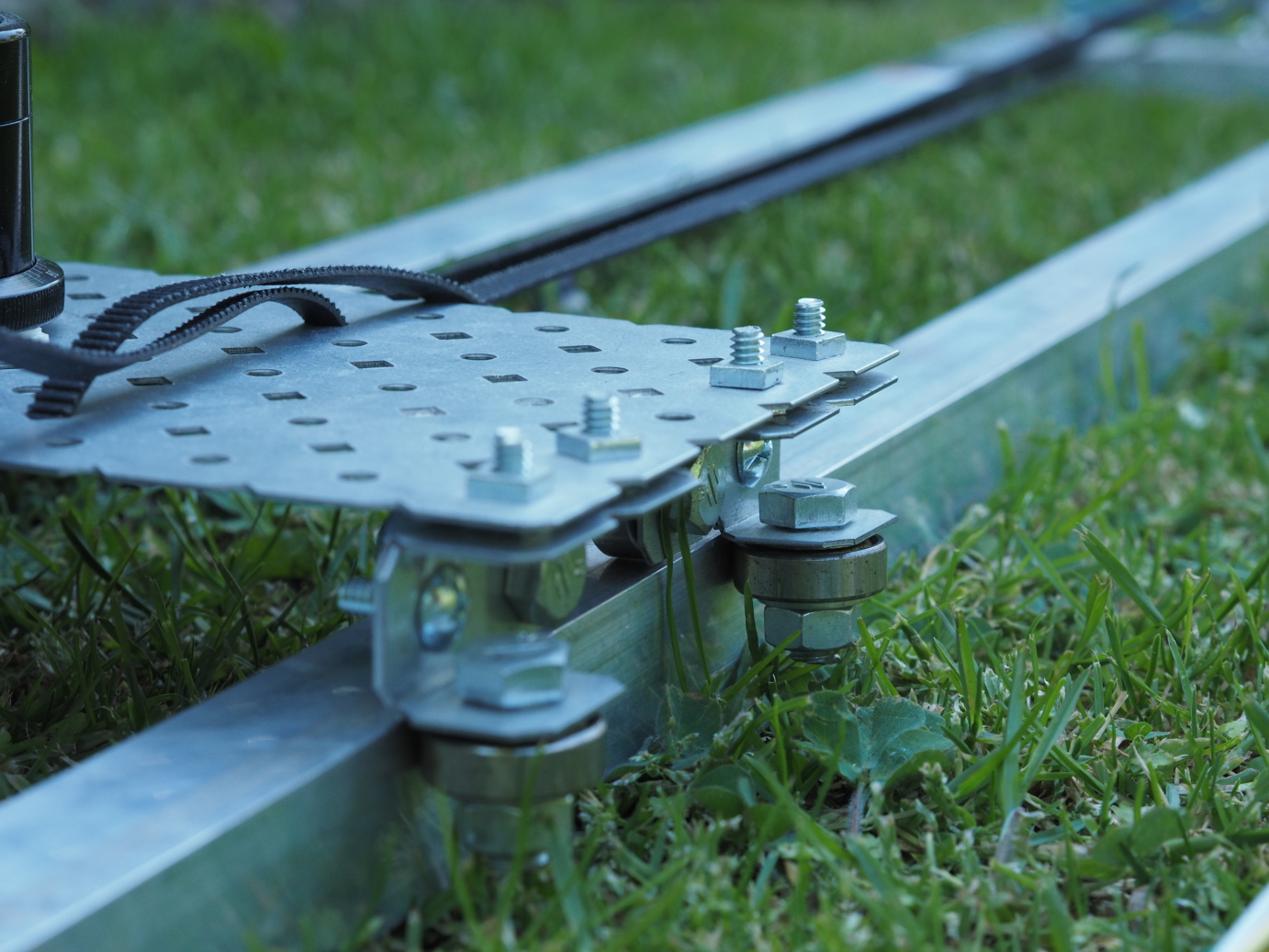 Here is a quick test video I shot using the slider. Unfortunately, I bumped it a bit at towards the end but you get the idea. There will be more exciting timelapses in the future that actually use the motion/parallex effect in a meaningful way. 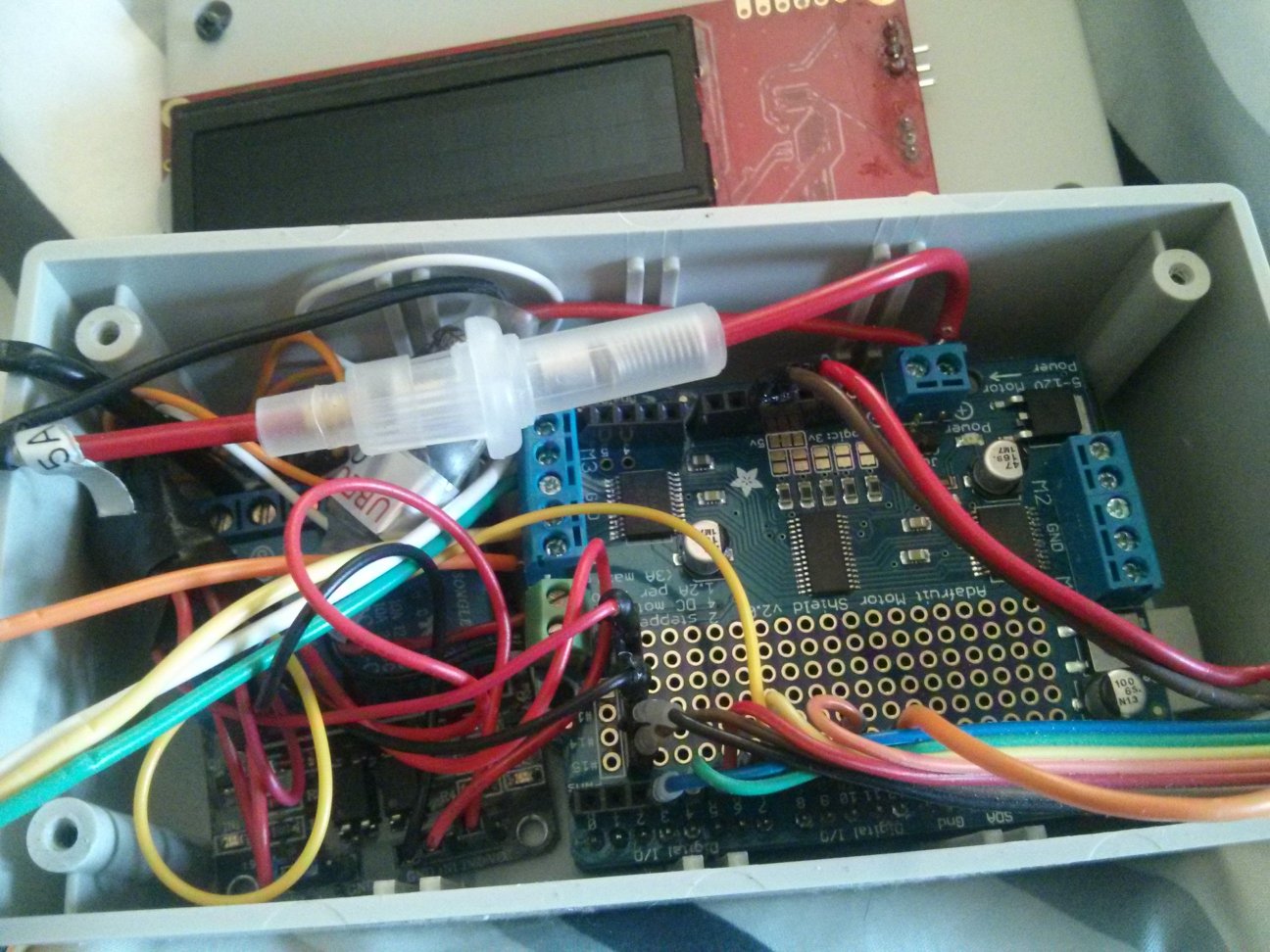 In the photo above - once you look past the rat nest of wires - you can see the motor driver shield sitting on the Arduino. All connections come out of the shield (they are fed through from the Arduino), so the rainbow ribbon cable is for the rotary encoder, there are some wires for the LED, ground and 5V, and also the stepper motor itself which is hooked up to the left-hand side 4-pin screw terminal. The two "things" encased in plastic in-line with the wires are a fuse and a switching regulator to bring the input voltage (9-12V) down to 5V for the Arduino. A linear regulator like the one that is on the Arduino would work too but might generate too much heat for a closed up enclosure. 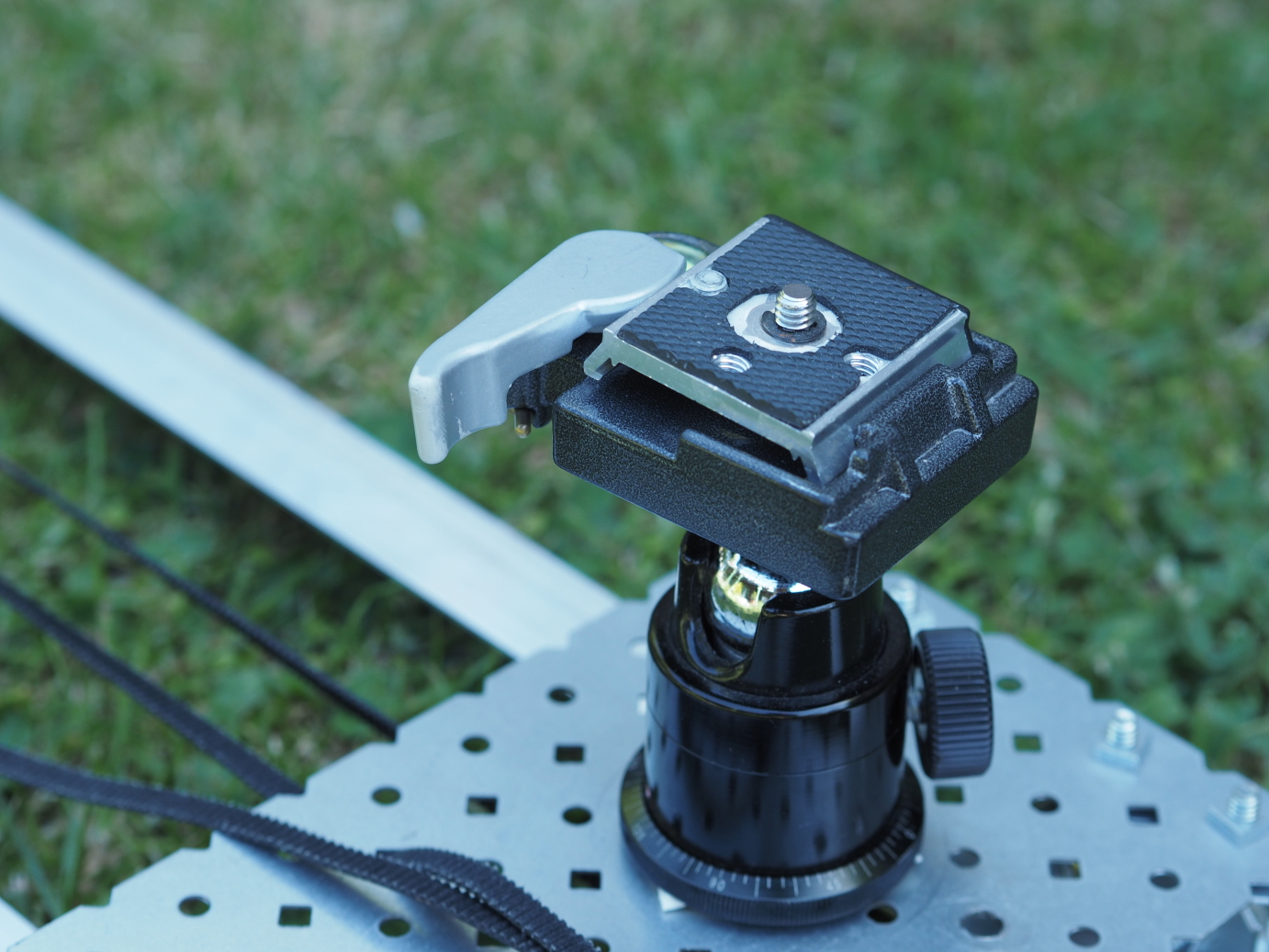 Photo above: a cheap but decent-sized ball head that unfortunately wobbles a little bit but does the job. Since all ball heads (and all decent tripods) use the same screw sizes, you can mount whatever you want, small and cheap or big and fancy. I like that the ball head has got a two-way water bubble level built-in.

On the Arduino platform I use the Adafruit_Motorshield library. To move the stepper motor the minimal distance and as smoothly as possible I run: 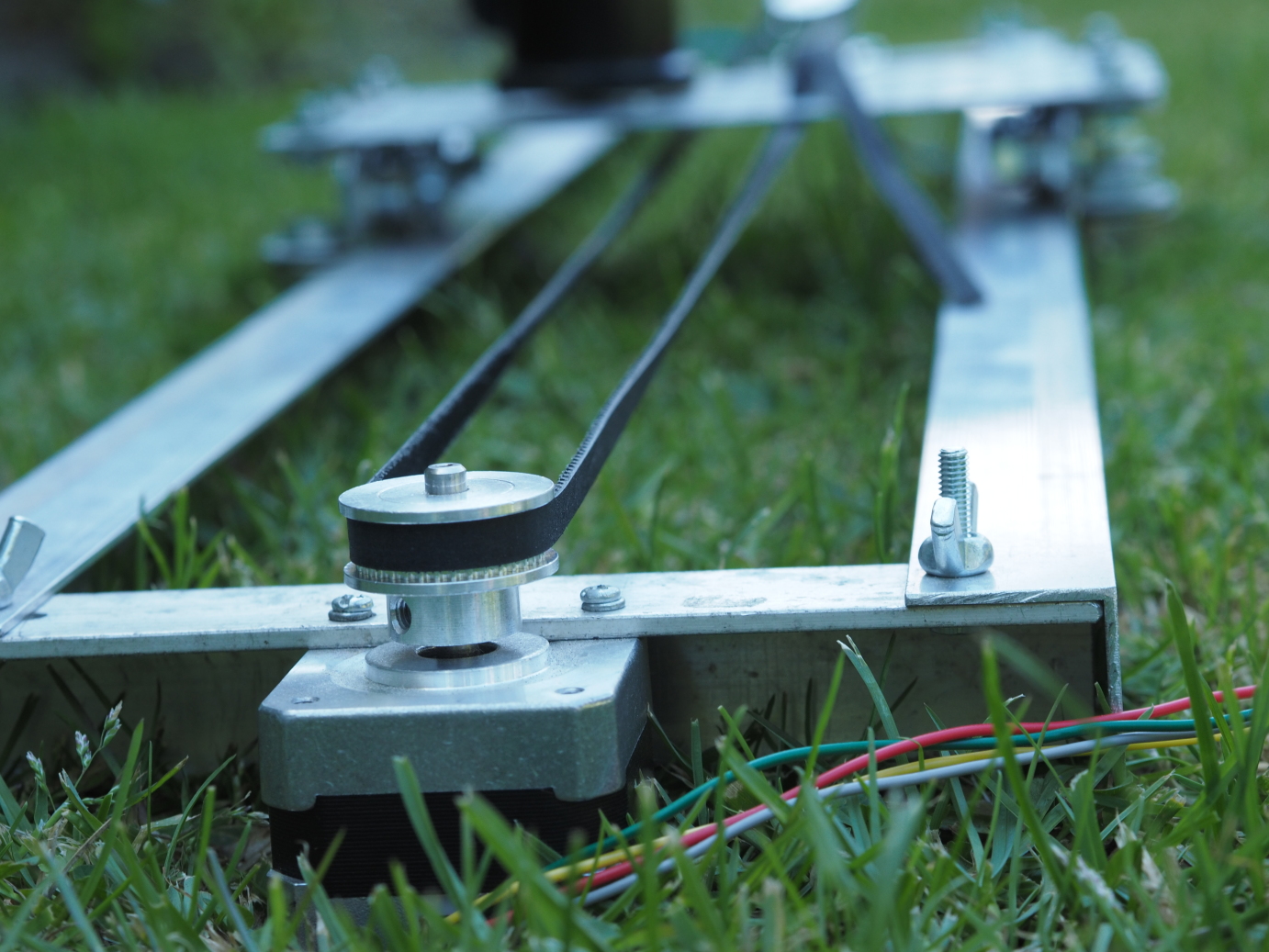 I also set up an LCD and a rotary button using the SoftwareSerial and ClickEncoder libraries, respectively. Text can be written to the 16x2 LCD directly over the serial line, plus there are some special characters that move the cursor, clear the screen, and so on. The ClickEncoder uses up one of the timers of the Arduino and unfortunately it is the same used by the MotorShield library so I can't use both at the same time. This is ok because I only use the rotary encoder to set up all the timelapse parameters, and once the slider is moving and the camera is taking pictures I don't want to touch it again anyway. It's basically two separate programs: first the menu/settings, then the timelapse.

I found that the 200 steps per revolution that the stepper motor provides aren't quite enough for super smooth and slow motion, so after about 15-20 minutes with one frame every second the cart will already reach the end of the rails. It is possible that I haven't configured the motor correctly yet but it is set to micro-steps in the code and as far as I know this is the smallest possible rotation. I use micro-steps instead of normal steps because the provide smoother movement: a normal step would yank the cart and make the heavy camera wobble too much. It also makes sure that the motor is always enganged in case the rails are on an angle. This way the cart can't slide back down. To solve the problem of step sizes being too big I might incorporate some model kit plastic gears but for now I have avoided it since it isn't that easy to get everything lined up correctly without making the whole construction incredibly flimsy. There are also other stepper motors out there that provide twice or more the amount of steps per full revolution, usually through internal gears (see the alternative smaller motor I've listed above).

). However, since the stepper motor requires 12V and 8 rechargeable AAs only provide a maximum of 9.6V, it does have issues climbing an incline stepper than about 20 degrees. On the flat it works great, though, and it lasts for many hours as well. In the future I might upgrade to a 12V battery or boost it up with a converter, maybe using a LiPo battery for their amazing energy density.

I've got a little micro-switch that I want to mount at the end of the rails so that it detects the cart hitting the end. This will eventually stop the timelapse. I also want to refine the menu system and hopefully improve the software side of driving the motors, i.e. better speed and step control.

In case I've already exhausted all possibilities regarding the motors, I might actually have to add two differently-sized gears to the system to bring the speed down so that I can take hour-long timelapses with many hundreds of frames.

And finally, panning while moving sideways would make my timelapses look much more impressive so adding a second motor is high up on the agenda. However, I'm not sure yet how to fit it between the camera and the top of the ball head (glue it to the quick-release plate?), or alternatively if it could or should live under the ball head in which case I'm worried about stability. The latter would see the motor mounted under the cart, however, which would be a very clean looking solution. Either mounting point will give very a different result when the rig is on an incline and depending on the subject it can work well or look really out of place.

The most important improvement, however, to be made is getting it off the ground. At the moment grass or plants can easily get caught in the wheels and there are no points to screw in a tripod quick-release plate (the end trusses hook quite nicely into the top of my Manfrotto BeFree Travel Tripod

) , though). Often something can look good at eye-level but having to put it all the way down on the ground limits my possibilities so a good 1/4" screw hole at either end would make it immensely more useful and stable in vegetation. 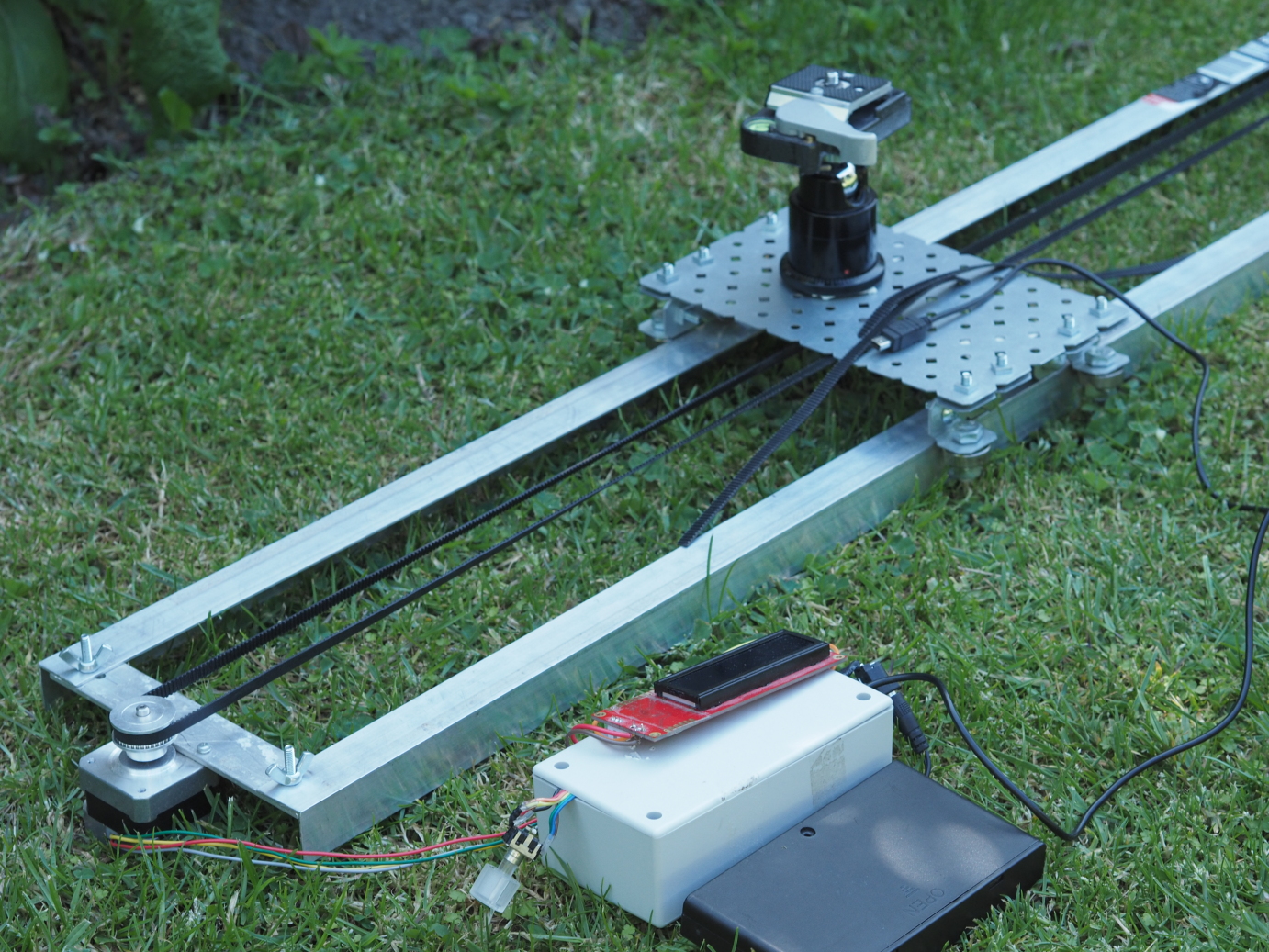 Please head over to Google+ or Twitter @tobiaswulff (see links on top of the page) to discuss this article or any of my photography and videography work. My Flickr and Vimeo pages also provide some space to leave comments and keep up to date with my portfolio. Lastly, if you want to get updates on future blog posts, please subscribe to my RSS feed. I plan to publish a new article every Wednesday.